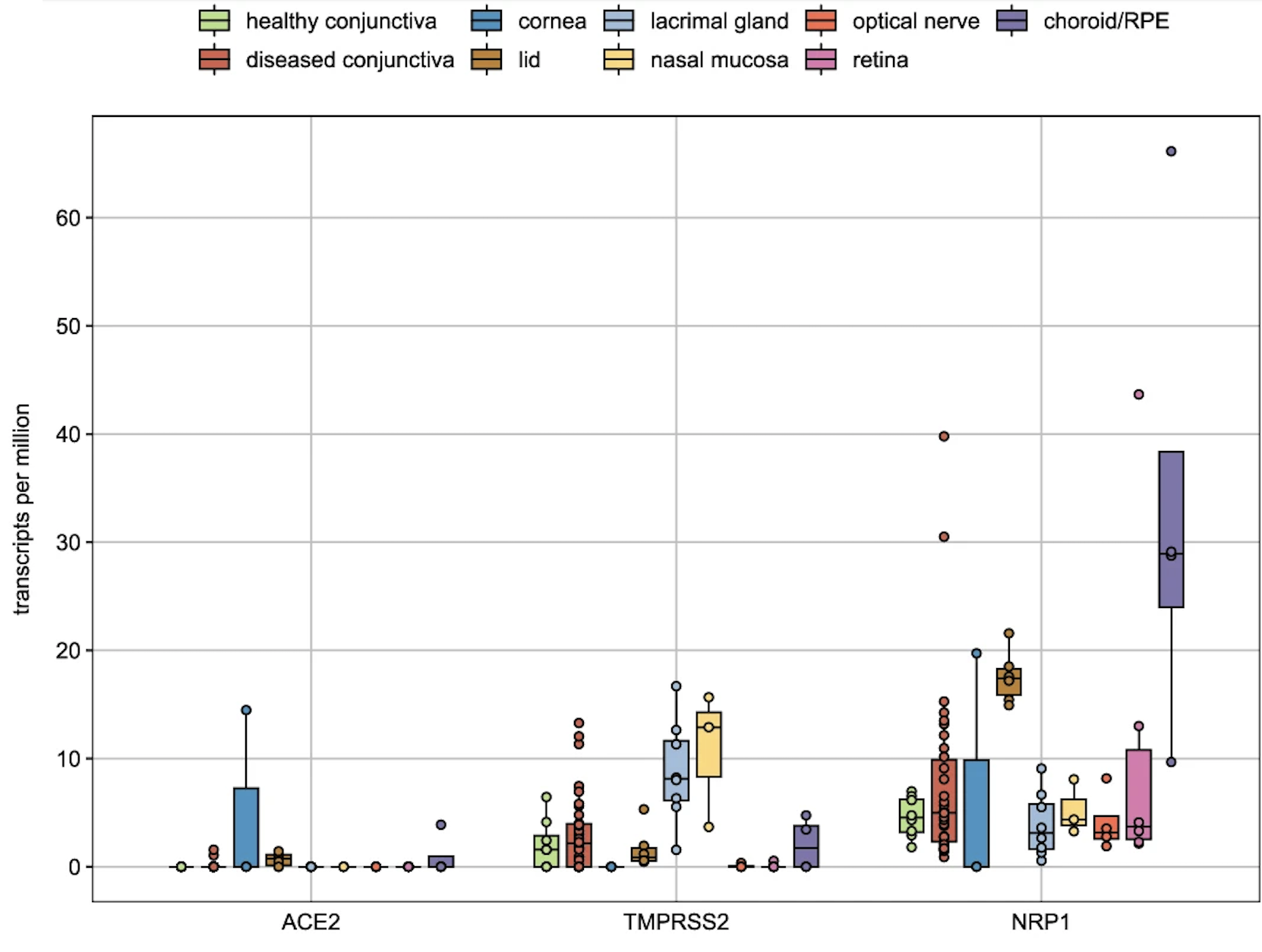 Despite the reported low expression of the primary SARS-CoV-2 receptor ACE2 in distinct ocular tissues, some clinical evidence suggests that SARS-CoV-2 can infect the eye. In this study, we explored potential entry sites for SARS-CoV-2 by viral S protein histochemistry on various ocular tissues and compared the staining patterns with RNA and protein expression of TMPRSS2 and ACE2. Potential viral entry sites were investigated by histochemistry using tagged recombinant viral S protein on 52 ocular tissue samples including specimens of the cornea, conjunctiva, lid margin, lacrimal gland tissue, retina, choroid, and RPE. In addition, ACE2 and TMPRSS2 immunohistochemistry were performed on the same ocular tissue, each with distinct antibodies binding to different epitopes. Lung tissue samples were used as positive controls. Finally, bulk RNA sequencing (RNA-Seq) was used to determine the expression of ACE2 and its auxiliary factors in the tissues mentioned above. S protein histochemistry revealed a positive staining in lung tissue but absent staining in the cornea, the conjunctiva, eye lid samples, the lacrimal glands, the retina and the optic nerve which was supported by hardly any immunoreactivity for ACE2 and TMPRSS2 and scarce ACE2 and TMPRSS2 RNA expression. Negligible staining with antibodies targeting ACE2 or TMPRSS2 was seen in the main and accessory lacrimal glands. In contrast, ocular staining (S protein, ACE2, TMPRSS2) was distinctly present in pigmented cells of the RPE and choroid, as well as in the ciliary body and the iris stroma. S protein histochemistry revealed hardly any SARS-CoV-2 entry sites in all ocular tissues examined. Similarly, no significant ACE2 or TMPRSS2 expression was found in extra- and intraocular tissue. While this study suggest a rather low risk of ocular infection with SARS-CoV-2, it should be noted, that potential viral entry sites may increase in response to inflammation or in certain disease states.